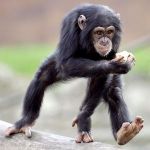 The next time you’re down the pub, engaging your favourite Chimpanzee in an arm wrestle, I want you to reflect on a few things (besides the absurdity of wrestling an Ape).

As you take up the strain, know that the fine-tuned positioning and slow, steady building of muscle force you exert is due to the greater amount of grey matter that you posses in your spinal cord; motor neuron nerves cells that connect to muscle fibres and regulate muscle movement. The huge surplus of motor neurons you possess allows you to engage smaller portions of your muscles at any given time. A Chimpanzee, by comparison, has fewer motor neurons, thus each neuron triggers a greater number of muscle fibres, resulting in a greater proportion of muscle activation.

Reflect on how this finely tuned, incremental strength allows you to engage in tensing your muscle for a longer period. It is this fine motor control that allows you to do delicate tasks, like be victorious on the Nintendo Wii or replace the RAM in your laptop, and you know that if the RAM chip stubbornly refuses to slot back into place, you can gently exert greater and greater precise force until it does.

Finally, as the arm wrestle begins in earnest, reflect on two last things: one, your brain limits the degree of your muscle activation in an attempt to prevent damage to the fine motor control components of your muscles; and two, a Chimpanzee has no such limitation. So as the Chimpanzee tears off your arm easily and beats you over the head with it, think to yourself that rather than engaging in an arm wrestle with a Chimp, which has four times your strength, try sitting at home playing your Nintendo Wii instead, the precise motions for which it seems we are supremely evolved.

Inspired by Alan Walker’s (Professor of Anthropology at Penn State) research article ‘The strength of Great Apes and the speed of Humans’; free to read in the recent issue of the journal Current Anthropology.

Like this article? Please consider submitting it to Open Lab 2009:

2 thoughts on “The strength of great apes…”