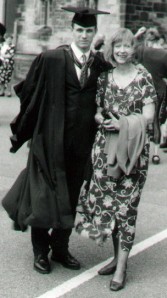 THIS week has seen many graduation ceremonies at the university, all imbibed with veritable Hogwartian pomp. It makes me reflect on my own graduation, which curiously enough was exactly 10 years ago this week.

I was full of excitement in the event of getting my BSc. It meant a lot to me, I’d worked ‘fairly’ hard for it, I’d gotten a good grade and was ready to go off and try to be ‘a scientist’. I hadn’t yet figured out how I was going to do that; it would turn out that I would use do a Master’s degree whilst I decided what I wanted to do (which was in fact to go and do a PhD; how inventive of me).

The degree ceremony, held in both Welsh and English (it was the University of Wales after all), was excellent; they actually took the route less travelled and entertained us. There were musical recitals, an award winning Harpist, some meaningful words of wisdom and the usual traditional grandeur. No pulling of fingers or such silliness.

It is in stark contract to the format of the ceremony at my current university, at least five years ago when I graduated with my PhD, where they decided that the appropriate means to celebrate the achievement was to talk about how much research funding the university had received, and what a good job so-and-so vice chancellor was doing. No one cared, everyone just wanted to get their few seconds on stage and be off.

I was of course, like all newly minted graduates, full of cock and bull, ideological and desperately wet behind the ears. I’ve yet to meet a graduate who doesn’t think they know it all, but as is ever the case, within a year, most graduates realise they know nothing. As the brighter ones will admit, ‘the first step on the road to wisdom is admitting that you don’t know anything’; a derivation, I guess, from Socrates’, ‘The only thing I know, is that I don’t know anything’.

Ten years on and I’m still in contact with some of those with whom I graduated, all of whom seem to be doing well in their lives and careers. I remember being reticent to refer to myself as ‘a scientist’ at that time, being worried of being a fraud (an uncharacteristic display of graduate humility); yet I’m glad to say that I can now refer to myself as a scientist in the truest sense, which I think I would have been happy about back then.

Once again I am faced with a summer during which I will have to make some difficult decisions. Either I step up to the next rung of the ladder and become a lectureship somewhere, or I step to the side and find another way to ply my trade, all be it away from the bench.

Still, at least I feel confident saying that the only thing I know, is that I don’t know anything.