I REFER in this case not to one of the opening chapters of the Fellowship of the Rings, but in fact to the September edition of Trends in Microbiology, in which a Dutch research team lead by Luis Lugones describe some interesting work with mushrooms.

Building upon an earlier patent by Lugones, the paper by Elsa Berends1, proposes for the first time the use of mushroom-forming fungi (the basidiomycetes) to produce N-glycosylated therapeutic proteins, an important class of protein-based therapeutic drug that represent a multi-billion dollar market.

‘Glycoproteins’ (proteins that have been processed by attaching a small string of sugars) are often prescribed to plug gaps in the metabolism of patients who for various reasons were born with, or have developed, errors of metabolism; these include insulin for treatment of diabetes, erythropoietin for treatment of anaemia, blood-clotting factors for haemophilia and a further 93 products (as of 2007).

Of course, prior to biotechnological approaches the original source of these proteins was directly from human tissues; blood plasma (for clotting factors) and pancreas (for insulin). However there were problems with purity, consistency and the constant need to test for the presence of viruses. These days a variety of systems exist for producing glycoproteins, include mammalian cell lines, transgenic animals, insect cell lines and yeasts.

In fact, it is this crucial processing step of this class of therapeutic proteins that has stimulated research. Glyosylation determines the biochemical and biophysical properties of a protein, and thus affects its bioactivity. Only mammalian cell lines are able to glycosylate in the correct manner needed by human cells, with incorrectly glycosylated proteins being poorly active or worse still, they may generate an unwanted immune response. However mammalian production of therapeutic proteins is costly and also requires continual testing for the presence of mammalian viruses.

In her paper, Elsa Berends describes how despite having the ability to secrete high levels of protein into the environment, previous attempts at solid-state culturing of filamentous fungi met with problems due to the ‘gradients of oxygen, pH and temperature with in the culture’, which cannot be controlled in industrial scale-up.

However, the fruiting body of the fungus, the part we would recognise as a mushroom, suffers no such gradients. Large scale production of mushrooms is already well established – as any mushroom fan knows – as are the methods for the downstream processing of the desired proteins. They’re also easy to store (both the seeding strains and the fruiting body ‘mushroom’), and relatively easy to genetically manipulate, to fine tune the desired proteins.

The above figure shows the process of adding the desired DNA to fungal mycelium (the part of a fungus that typically grows underground) that have had their cell walls stripped away, leaving them pretty exposed; the cells are then grown in such a manner as to select for integration of the DNA; those cells producing the greatest amount of the desired protein are identified and selected; and finally, they grow mushrooms. This whole process can take 2-5 weeks.

There are still a few issues to iron out (aren’t there always) but it seems like a potentially robust system for the production of glycoproteins that will be metabolically attuned for human use. 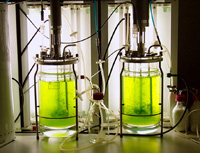 Perhaps a significant competitor for this new work is research being conducted in Germany on a ‘moss bioreactor‘, essentially an alternative means of producing therapeutic proteins, but using a plant-based system. Being rather primitive plants however, mosses have retained some features that make them quite useful for producing correctly glycosylated human proteins, with only a minimum of genetic manipulation, and have relatively simple and cheap growing requirements. I like the idea of a moss bioreactor; apparently in order to get it to grow significantly, you need to splice up the growing tissue periodically to stimulate rapid growth from the freshly cut ends.

It all sounds like a salad of potential pharmaceuticals.

[Addendum: Bacteria are less useful for glycoproteins because they lack the molecular machinery necessary to add the small string of sugars to proteins. Bacteria, which until comparatively recently were thought not to employ N-glycosylation pathways, represent a further potential source of glycoproteins, based on work ongoing by researchers at ETH Zürich.

Like this article? Please consider submitting it to Open Lab 2009:

4 thoughts on “A shortcut to mushrooms…”