A few years ago I took part in an RSPB survey called the Big Bug Count, which sought to quantitate what had hitherto been anecdotal accounts that the number of insect splats on car windscreens had decreased in recent years. Essentially it was a sticky pad of define area that was placed on the front registration plate of your car. Following a car journey (I drove the 20 miles from from Keswick to Windermere), the number of bugs splats were counted and the results submitted.

Some suggested that the dwindling insect splats may in fact be due to cars being more aerodynamic, and not the tin boxes of previous decades. However, even I had noticed that I was swallowing fewer bugs on my bike rides around Cumbria than my childhood years, but hardly scientifically rigorous data – I do after all scream with glee less now than I used to.

Unfortunately, because the ‘bug splat’ survey, as it became known, was the the first such study by the RSPB, they could draw no conclusions as to whether the insect population was dwindling (despite what some press articles claimed) until subsequent seasonal surveys, over multiple years, were performed.

Of course, what some of you may have noticed is that the RSBP doesn’t seem to have followed up with any further surveys – at least none that I’ve been able to find in 30 mins of googling and scouring their website. Shame, so we had a baseline, of sorts, against which nothing further has been measured.

But assessing species diversity is an important task, as I’m sure anyone can appreciate. Changes in biodiversity act as markers of climate change or pollution, and have knock on effects on the food chain, such as bird life.

However,  a similar technique has been used to determine species diversity in a recent study reported by Sergei Kosakovsky Pond et al. (University of Pensylvania) in Genome Research last month. Whilst the windscreen splatter technique may be moderately useful for enumerating the number of splats per unit distance of travel, try identifying the species of bug from a visual inspection of a sticky splat and you have a problem. One way is to attempt a metagenomic analysis where you sequence all the DNA in the organic goo, which will of course come from multiple species. Such analyses are usually performed on samples from ponds of unculturable microorganisms, and give us some idea of the diversity of species in there, even though we can’t actually grow any of them in the lab. The researchers in this study intend to extend such metagenomic studies to eukaryotic (ostensibly ‘higher’ organisms), which in the past has been a typically mind-bogglingly dull, time-consuming and resource heavy analysis to perform.

Fortunately, the aim of this project has been to come up with a methodological work flow, a means of effectively handling and processing metagenomic information in which ‘a user uploads reads generated by the [DNA] sequencing machine, performs quality control (QC), generates [DNA] alignments, and conducts full taxonomic [family grouping] representation analysis, all entirely within a web browser – using an analysis suite called Galaxy.

Eukaryotic metagenomics made easy for the masses, woo!

The researchers, having established this ‘user friendly’ method, then use it to ask two questions:

(1) Is modern technology combined with available sequence data sufficient to identify eukaryotic taxa from low coverage random sequence samples? [Can we detect species diversity from only small amounts of DNA of any one species using the current state of the art DNA sequencers and current DNA databases]

(2) Can “eukaryotic metagenomics” be used to contrast the species composition of distinct geographic locations?

So, in order to test this in the field, the researchers did what any self-respecting scientist would do, they went on a road trip: 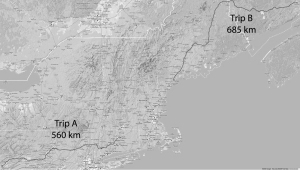 …and after their road trip, and surely a little kicking loose, the researchers did some sequencing of organic windshield-splatter goo.

I’ll tell you now, this isn’t exactly a happy ending. The answer to both questions posed are essentially, ‘almost, but not quite yet’. You see, the ability to identify species diversity on the basis of DNA is limited by the availability of DNA sequences that have already been sequenced for different species, i.e. those you want to identify, in the large DNA sequence databases (GenBank). So basically, what the researchers suggest is that if we had a decent amount of representative DNA sequences stored in the databases, for all the insects we may hope to identify, then their methodology will work. It’s simply a matter of time, seeing as the cost of sequencing DNA is getting ever lower.

BUT, the study did throw up some interesting finds. Some of the DNA they collected on their (initially carefully handled and uncontaminated) windshield sticky patches included that of white-tailed deer, and one trip also brought up DNA of the genus Homo, i.e. human. This was despite the trips being what the researchers refer to as,  ‘uneventful’. Such matches are probably due to road debris (including road kill).

They were able to validate the reliability of their methodology on one well known species however. The most abundant insect species DNA they collected was that of the genus Acyrthosiphon, which includes the pea aphid Acyrthosiphon pisum. Now the pea aphid requires a bacterial endosymbiont called Buchnera aphidicola that the aphid needs for survival and reproduction. Thus they would expect that the count of DNA reads identified as the bacteria to exhibit the same pattern as those of the aphid.

So I hope, given time, we may actually be able to return to the splatometers and find out something meaningful about biodiversity.

One thought on “Windshield splatter analysis…”