IN evolutionary theory there is a phenomenon known as canalisation, a process in which the phenotype (i.e. the outward physical appearance of an organism) remains unchanged, despite genetic or environmental influences.  This suggests that a mechanism exists to buffer the physical appearance from such changes, which may explain why some species can remain mostly unchanged for millions of years.

The idea of capacitance was first suggested by Rutherford and Lindquist 1 following experiments on a protein called heat shock protein 90 (Hsp90) in fruitflies. Generally speaking, heat shock proteins assist in the maintenance and correct folding of cellular proteins, especially when under temperature stress; Hsp90 plays a particular role in maintaining the unstable signalling proteins that act as key regulators of growth and development.

They suggested that in nature, a stressing event such as high or low temperatures may overcome the protective buffering effect that Hsp90 has on maintaining these key regulators. As Hsp90 becomes diverted from its usual role, due to an increase of stress-damaged proteins in the cell, those cell signalling proteins it normally maintains are free to adopt a range of altered behaviours, interfering with the development of the organism. The result is morphological variants upon which natural selection can act. Rutherford and Lindquist found as much, with chemically and environmentally compromised Hsp90 resulting in flies with abnormal wings, legs or eyes, they observed a broad variety of phenotypes.

Rutherford and Lindquist went on to demonstrate that the capacity for such remarkable variation was pre-existing, i.e. it was encoded genetically prior to the stressing event, but had been silenced. Evolutionary capacitance may therefore provide a mechanism of adaptive evolution in which a population under stress may release previously silent variation, resulting in the appearance of certain individuals with more desirable traits in that changed environment. When such revealed traits are selected for they can become fixed and independently of the buffering action of Hsp90.

This week, in a letter to Nature, Valeria Specchia et al.2 report some fascinating evidence that indicates that beyond merely acting as a gate-keeper to unleash variation, mutations of Hsp90 that compromise its functionality result in new, rather than pre-exisiting, variation. They observed that mutations in Hsp90 affect the production of piRNAs. These are small RNA molecules that are involved in the silencing of genes, particularly those involved in development, i.e. sex cells like eggs and sperm, and all the cell types that give rise to these cells. These piRNAs are also responsible for repressing genetic elements called transposons. 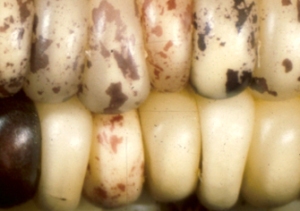 To understand why this is important, it helps to know something about transposons. Transposable elements, initially known as ‘jumping genes’, were first identified by Nobel laureate Barbara McClintock in maize kernals. They are essentially segments of DNA that can either copy (or remove themselves entirely), from one location to another. Whilst not entirely a random process, a transposon may well jump into an active gene and disturb its normal operation. The images shows variation in pigmentation in maize kernals as a result of transposable elements jumping in and out of  genes responsible for pigmentation.

“Because active transposons are mutagenic, these data suggest that the phenotypic variation observed in Hsp90 mutants could be due to de novo mutations produced by activated transposons.”

Specchia et al. show that mutation of Hsp90 is linked with an increase of activated transposons jumping around to other regions of DNA, and that the phenotypic mutations they saw in their Hsp90-mutant fruitflies were due to mutations produced by these activated transposons. Rather than complement the mechanism proposed by Rutherford and Lindquist – that of releasing pre-exisiting variation – Specchia et al. may have identified the source of the remarkable variation seen in earlier work by demonstrating new mutation/variability caused by the release of transposons, which have a known mutagenic effect.

Specchia et al. seemed somewhat dismissive of the evolutionary capacity hypothesis itself, stating only that the mechanisms they have described ‘also potentially provides another molecular interpretation with respect to the vague capacitor concept.’

Vague perhaps; to robustly demonstrate evolutionary capacitance it will be necessary to have more evidence that overcoming the canalising mechanism accelerates evolution to a new optimal phenotype, and that the process releases pre-existing variation in the process. I don’t think anyone is dismissing the earlier work of Rutherford and Lindquist, their subsequent work has shown an Hsp90-mediated mechanism for the evolution of new traits in the form of drug resistance in fungi. 3 In this case, rather than buffering the effects of new mutations, it allows them to have immediate phenotypic consequences; fairly important when trying to resist a drug that might kill you.

What such studies do show is a highly complex system of phenotypic sculpting, and numerous mechanism via which even a single protein can go about promoting the emergence of new traits, when required.